Razorback™ is a vehicle-mounted system that utilizes chemiluminescent marking disks founded on ChemLight® technology that can be used in Improvised Explosive Device (IED) Defeat, Route Clearance, Mine & Obstacle Clearance, Chemical, Radiological, Biological and Nuclear (CRBN) Missions, Convoy Training and much more. The system is integrated into the vehicle’s electronic system allowing it to be safely and effectively operated from within the vehicle. The consumable chemiluminescent disks are available in five colors plus infrared and are supported by the National Stock Number (NSN) System for both the US Government and NATO Supply Systems.

RAZORBACK IS A DUAL UNIT SYSTEM TO BE MOUNTED ON BOTH SIDES OF A CONVOY VEHICLE, DISPENSING CIRCLE LIGHTSHAPE MARKERS

Robustly field-tested and battle-proven in combat operations, Razorback™ provides sustained mission capacity with a 200-unit magazine per side, with superior device visibility. In contrast, current expensive systems offer limited magazine capacity and low-visibility devices. The consumable disk chemistry is non-flammable and non-toxic. We are working to develop new generation of chemiluminescent disks that will be biodegradable and environmentally-safe, breaking down naturally when exposed to the environment.

IEDs and mines are prevalent in conflicts around the world, with many countries being sown with mines over many decades of conflict. Whether in combat, training, or humanitarian missions… Razorback™ provides the most effective solution, at the lowest total cost of ownership, providing the highest chance of mission success.

The Razorback™ System is a dual unit system that is easily mounted on both sides of a convoy vehicle. Once in use, the system’s proprietary design activates and dispenses Cyalume® LightShape® circles, creating a visible route for subsequent convoy vehicles to follow.

The system can be set on variable speeds to accommodate different terrain and levels of visibility. The LightShape® circles are available in 5 visible colors, as well as infrared for covert marking capability. This system allows for easy marking and affords the operator direct access to the system while the mission is underway.

The Razorback™ System began as a cooperative project between the United Kingdom Ministry of Defence and PA Consulting of London, UK, utilizing Cyalume® LightShape® circles as the marking device. The system is designed for current and future field operations.

The Razorback™ System is the ultimate solution in route clearance marking and will revolutionize protected mobility practices around the globe. 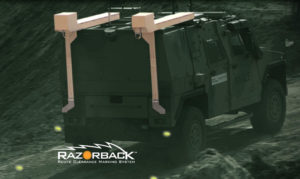 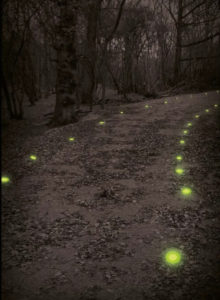 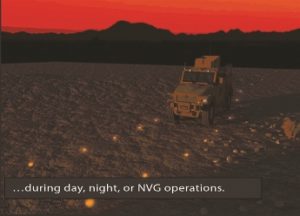 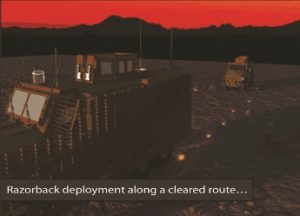 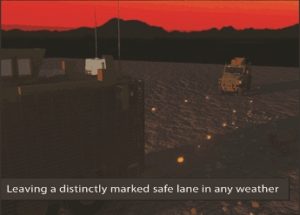